For this study I am particularly interested in measuring;

Asking the participant to inform me whether or not they have taken their medication during the trial could act as another prompt or cue; influencing their behaviour.

In an ideal world, I’d use a Medication Event Monitoring System (MEMS) to measure the response to the trigger. The below example shows a pill bottle (more commonly used in the US) that logs the time and frequency of when it was opened. This would allow the researcher to evaluate whether or not their trigger resulted in immediate action by the participant by noting if the desired action was executed after the cue was received. 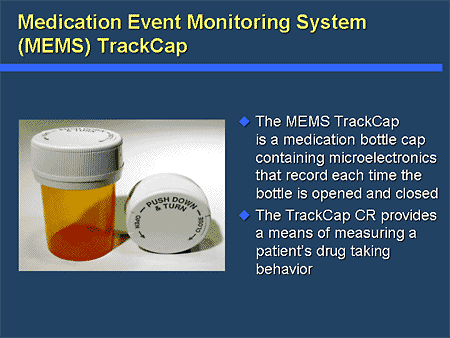 I, however, do not have access to this type of technology.

Manual pill count – how many are left over

Counting the number of remaining pills after the experiment is completed would allow me to see how many times it was missed. This method on its own is imprecise as there is a possibility that the participant might double dose to complete their medication, especially as they know the placebo is not a danger to them, unlike real medicine.

(Adapted BMQ1) – Did you take any of your prescription?

(Adapted BMQ1) – How many days did you take your prescription?

(MMAS-8) – People sometimes miss taking their medication for reasons other than forgetting. Thinking over the last week were there any days when you did not take your medicine?

(MMAS-8) – How often do you have difficulty remembering to take all your medicine?

(MMAS-8) – How often do you have difficulty remembering to take all your medicine?

(BMQ1) – How many times did you miss taking a pill?

An interview asking about the participants behaviour would help to learn;

I created a guided diagram form to be completed during the interview which would allow further discussion about the participants adherence instead of using the medication adherence surveys such as BMQ1 or MMAS-08. This option was preferable because it allows me to collect qualitative and quantitative data about adherence.

The visual representation of their adherence allows us to see when they took their medication and discuss why they missed certain days and times. Combined with the scale of “easy/hard to do”, we can understand the context of their medication regime. I looked at online surveys while considering how the study could scale-up without exponentially increasing the amount of time it takes to analyse the results. The examples below show example variations of the adherence questions.

The iconography in the single choice option isn’t quite right but the concept was to allow the participant to make one single selection instead of multiple clicks.